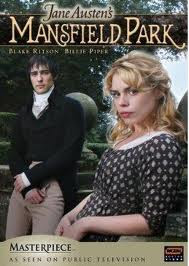 As part of Everything Austen II, I decided to watch the 2007 MP again.  I reserved a copy through the library and watched it during an afternoon in August.

Thoughts and ruminations:  Billie Piper (Fanny) is prettier than Sylvestra Le Touzel (Fanny in the 1983 BBC version), which I appreciated because I feel like Fanny always gets the short end of the stick.  She's the heroine that seems to fall by the wayside (along with Catherine Morland) and it always irks me a bit.  That said, Sylvestra Le Touzel gives Fanny a bit more depth than Billie Piper.  (Is it the eyebrows?  Anyone else have thoughts on that?)  While depth is good, Sylvestra gives us the quiet mouse performance.  I have always envisioned Fanny somewhere between the two.   In Billie Piper's performance, it feels like you can see her biting her tongue at times--like there's more she wants to say but can't because she shouldn't or because it would be out of character.  I liked Blake Riston as Edmund, but there is nothing new to note.   Is Edmund that easy to portray in a film, meaning that there is not much depth to his character and he is easy to sum up?  I'm struggling on this one.  I think it's time for another read of MP.

One bit they did get right in this film version is Edmund's like (lust? love?) of Mary Crawford.  This bit always makes my stomach turn--for someone so likeable and smart, Edmund's pretty clueless about her character.  Haley Atwell's does a delightful job as Mary--she is as slimy and cold as ever.  Well done.  And let me just say--Mrs. Bertram and Pug are at least tolerable in this version.  This version, however, did seem to chop the plot into bits and leave one hanging or just wondering some.  Suddenly our characters are working on a play, Mrs. Norris' exits without much fanfare (implied and perhaps not as direct as I'd like), Mr. Bertram is back with Tom.   MP is good because it takes its sweet time to get to where it's going and here it rushed into the ending and left us all happy in just a few short minutes.  A bit too Hollywoodized for my taste of Jane.
Posted by Bloggin BB at 12:00 PM

I agree. This version was way too short and really chopped up the plot. I thought maybe it should be retitled "The Crawfords." :-)

Not my favorite adaptation, but the actors are amazing considering what they had to work with (not Jane's story, but the film script);-)

Bloggin BB
A Janeite. Not as obsessed as others out there in the blogosphere, and not always the first to know what's new in the Jane World. I blog when I have time and when I get a chance to read. (Did I mention I'm a mom to a 3 year old and an infant and my "day" job is that of middle school librarian?)

Small disclaimer here: I am not associated Ms. Laurie Viera Rigler or her book, Confessions of a Jane Austen Addict. I wasn't trying to copy book title when I created my blog. I hadn't heard of it yet. I was just trying to be clever in the creation of said blog. The ID was open on blogger, and yet, it seems someone has beaten me to the punch. So much for creativity...